Visit to a Roman Theatre- Les Bouchauds, near Rouillac. 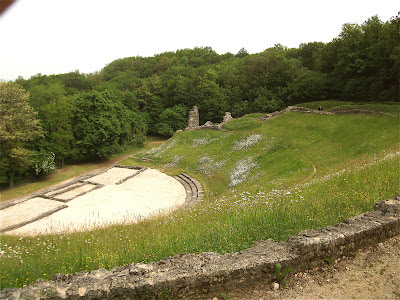 As is often the case, it`s the visitors to a region who stimulate the blasé inhabitants to visit the local sites of interest, and this certainly happened yesterday. Patrick and Cécile, our friends from Lille, are visiting us with their caravan and suggested a visit to these Gallo-Roman remains.
The site is situated in open country-side on a little hill near Rouillac. At the end of the 19th Century a local landowner noticed traces of ruined walls covered by forest on his land. Suspecting remains of a Norman castle, he started a treasure hunt. Disappointed at the lack of treasure, this unsuccesful archeologist sold the site to a limestone quarrier, who luckily seems not to have got round to exploiting it before it was recognised and protected as a Roman site,some 1000 years older than the first owner had thought. Today the remains slumber in the woods, overlooking the plains to the north.
The Theatre was sited to take advantage of a natural bowl in the side of a little hill, and must have been imposing in its heyday, seating some 7000 spectators. Apparently it was used for cultural, religious and political events rather than the spectacles and gladiatorial games of the arenas. The spectators would have been seated on wooden benches, apart from the grander persons in the front few rows who had stone seats which still survive. It is a strange feeling to sit on a seat previously occupied at the time of Christ by an august Roman bum!
I even took the opportunity to tread the stage and to declaim a few lines, `Friends, Romans, Countrymen, lend me your ears` The accoustics are good and Kim, seated in the audience at the top of the bowl said she could hear every word.
Most of the buildings have disappeared, but the shape of the amphitheatre remains to show how the theatre must have looked in its heyday, and to show how our remote ancestors amused and instructed themselves so long ago.
In fact, a very amusing visit which we all enjoyed.

Bye for now, going to bring myself up to date with a morning cup of coffee.
Publié par Richard Brown à 23:33